Case Study from the South-East region of Mauritius: Identification of CSA practices by students 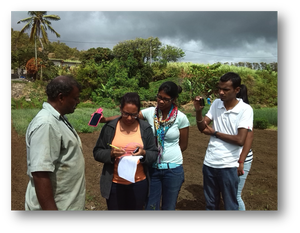 During a site visit conducted in the coastal villages of Mauritius namely Petit-Sable and Grand- Sable in the Southeast region of Mauritius, some 25 young students from the University of Mauritius doing a degree Agriscience and Technology were exposed to several climate-smart practices that vegetable farmers have adopted as their farming strategies.

Among them the students were able to recognize practices such as mulching, multi-cropping, algal compost, kitchen waste compost, fallowing and run off farming among many others. The young students also received part of the experience of a farmer who has over 30 years of experience in the fields.

One of the innovative methods adopted by local farmers was the use of old clothes as mulching. Use of clothes not only help to retain moisture in the soil but has also a very long life span and therefore can be used for a very long time. Being biodegradable they do not pose any danger to the environment.

Other local practices that were identified:

Vulnerability of the farmers to climate change 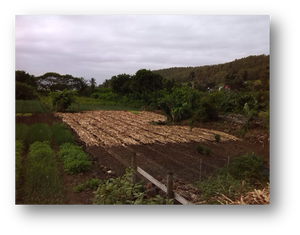 Though the farmers have adopted a lot of CSA practices, they are still very vulnerable to climate change. They heavily rely on underground water for irrigation purposes, but when the sea level rises during high tides, sea water gets in their wells that they have to dig plus the salinity of the water increases. Thus, the water becomes unsuitable for irrigation and hence the crops are heavily affected.

However during heavy rainfall fresh water table rises and consequently the salinity of the underground water decreases and the farmers can use them again for irrigation. One observational practice that the farmers have adopted is the presence of tadpoles in the wells. According to them tadpoles disappear when the water becomes too saline and therefore when the tadpoles disappear they do not use the water for irrigation.

With the impact of climate change it is projected that the sea water level will rise and there will be fluctuations in the rainfall pattern. These occurrences can have a major impact on the livelihood of the farmers from that region. If sea water level rises saline water will penetrate more into the water table hence increasing the salinity of the water and coupled with reduction in rainfall, the farmers will no longer be able to sustain plant growth.

Among them the students were able to recognize practices such as mulching, multi-cropping, algal compost, kitchen waste compost, fallowing and run off farming among many others. The young students also received part of the experience of a farmer who has over 30 years of experience in the fields.