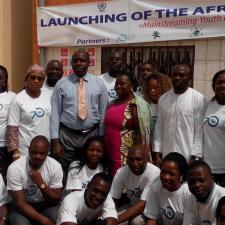 THEME : MAINSTREAMING THE YOUTHS IN THE IMPLEMENTATION OF THE SDGS

On Tuesday, December 29th 2015, the African Youth SDGs Training Program was launched at AFPEFAM’s head office at Mendong Visite technique with 30 participants from youth and women groups, Civil Society Organizations and other associations.

This report summarizes all the activities that took place during the event, including the event’s main objectives and expected outcomes.

I- The strategy and rollout of the training :
It started with a welcome speech by Mr.Ntiokam Divine who initiated the Program.
Mr. Divine briefed on the main objectives as well as the expected outcomes. He stressed on the need to:
 Ensure youths are well informed and own the 17 SDGs, which should be translated into local languages to enhance communication effectiveness.
 Establish SDGs Clubs in schools (nursery, primary, secondary and tertiary institutions) in order to read a broader target audience.
 Endorse all trainees as SDGs Ambassadors within their respective communities.

Mr. Divine later on briefed the participations on the historic MDGs, the new post-2015
development agenda and emphasized the contributions of the MY World2015 global
survey, which fed the 17 SDGs.
Thereafter, Mrs. NGOUYAMSA AWAWOU, president of AFPEFAM.Gave an
overview of AFPEFAM’s mission and activities and underscored that they were proud
to be selected in Cameroon to collaborate with other partners to translate SDGs into
local languages.

Hernandez Nsangou NJIFON and Guy ABOGO volunteers at AFPEFAM explained in more details the transition from MDGs to SDGs,listing the various thematic areas that were missing in the MDGs but have now been incorporated in the in the SDGs. They jointly shared their experiences and motivation in translating the SDGs into Shupamum and Ewondo languages.

Ntiokam Divine later on reminded participants to take note of the 3 pillars of SDGs ( Social development, Economic development and Environmental sustainability) and the 5Ps of SDGs namely: (People, Planet, Partnership, Prosperity and Peace).
Mr.JeanNjita, the Director of the UN Information Centre in Cameroon advised participants to own the SDGs through disseminating in local languages and to explore better means of communication.

Mr. Njita also mentioned that the training marked a huge step forward towards the start of the SDGs implementation from January 1st 2016.

Additionally, he thanked the volunteers for their support for the UN System in Cameroon and for wanting share the SDGs Story in local languages. Such a move, he noted, would enable the inclusion of the most marginalized communities in the process. He reiterated that the 2030 agenda will have two follow-ups and review mechanisms in 2020 and 2025
respectively.
He said: « we shall have another world, the world we want, a better world for the
future generation »
A coffee break session was coordinated by Miss. Pam Gaelle who ensured that everyone had a bottle of water for refreshment before the next phase of the training.
The next phase was the oral reading of all 17 SDGs, which had been translated to Ewono, Shupamum, Basaa and pidgin by Mrs.Toua Berthe, Hernandez Nsangou, Oum Gerald and Tabi Joda respectively.

II- Results and a way forward :
The main objectives of the training were met: all participants shared their comments and contributions after the training. Participants asked questions regarding what next actions to take after the training? Mr. Jean explained in detail reassuring them that 2016 is a year of sensitization and mobilization of all Cameroonians in support of the SDGs.
Mr. Njita reaffirmed the support of the UN System in Cameroon for the historic and innovative program, encouraging all participants to keep the ball rolling.

Finally, all participants took pledges by signing on the white cloth for references.

Report drafted by: Hernandez Nsangou, and Ntiokam Divine
For more details about the programme, contact ntiokam2@gmail.com